Have you taken a recent interest in getting a bicycle but don’t know what you want?

Maybe you’re trying to get a little more active, and you see yourself cruising down urban streets and bike lanes during the week, then getting a little more adventurous with some off-road riding on weekend getaways.

You’ve heard of hybrid bikes, and you’re hoping that the term “hybrid” suggests a bike that will be able to satisfy your need for nimble road riding while also being able to tackle some rough terrain on the weekend. But can a hybrid bike go off road?

Read on to find out. We’ll start with the basics.

What is a hybrid bike?

Suzanne walks into the board meeting at Bikes Inc. Her boss, Mrs. Bigwheelie, sits at the head of the table.

“Suzanne,” she says, “What if we had a more versatile bicycle—one that could satisfy both your road-riding urges and mountain trail desires!” The big boss slams her fist down on the table. “Make it so!”

Perhaps that’s not how the hybrid bicycle was born, but here we are, looking at a category of bike that’s often maligned by snobby riders.

Some people say, “Just buy multiple bicycles.” That may work for some, but even the wealthy don’t have space for several bicycles if they live in an apartment. If you’re dating someone who owns both a road bike and a mountain bike, you’ll have a mini fleet!

A hybrid can be an excellent choice for those on tight budgets, or who enjoy versatility.

It is important to note that there is a spectrum of hybrids. Some are much closer to a road bike, others are much closer to a mountain bike. If off-roading is your main concern, then you will certainly want to be looking at bikes near the mountain-bike end of the spectrum. Just remember that they will likely be slower and make for a more difficult commute than hybrids at the other end. 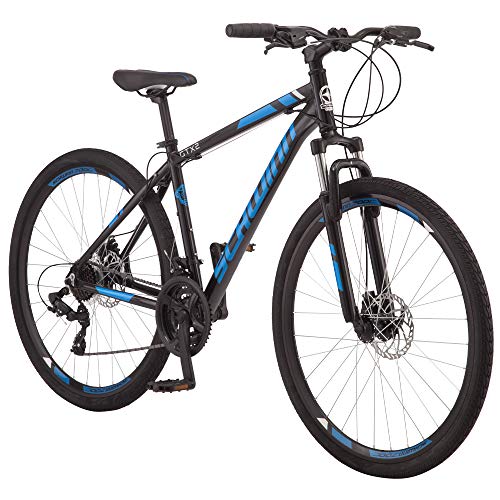 The Schwinn GTX Hybrid is a good example of a hybrid bike that falls more toward the rugged, mountain bike end of the spectrum.

Hybrids don’t get much love from bicycle purists. They will often argue that it’s better to put road tires on a mountain bike—or knobby tires on a road bike—than to purchase a hybrid and try to ride both styles on the same cycle.

While I appreciate the purist point of view, I disagree with the notion that you could enjoy road tires on a mountain bike. While you are huffing and puffing up a hill, bouncing up and down, you could very well find yourself being passed by Johnny No-Helmet riding a stolen single-speed, who’s going twice as fast with half the effort. The hybrid bicycle prevents this scenario by offering fantastic versatility and great bang for the buck.

A hybrid bicycle’s tires work well for road riding, providing much less resistance than any off-road, knobby bicycle tire while still giving you decent traction when you’re off road.

Without a rear suspension to dampen your pedaling efforts, you’ll fly up the hills. While the lack of a front suspension fork and “hard-tail” suspension in the rear are limiting factors in the bicycle’s ability to go fast on rough terrain, it certainly does not exclude it from mountain bike trails.

The gear ratios of a hybrid bicycle are more tuned toward road riding, while the components are beefed up for some moderate off-roading. If you’re planning to ride off-road and travel uphill much, you may want to look into an e-bike instead. The assistance of the electric motor is very useful in scooting you up steep, muddy trails!

My favorite thing about the hybrid bicycle is that it’s the ultimate “grab-and-go” bicycle to put on the back of your car for the weekend. Anywhere you want to ride, save for the most sketchy and challenging black diamond trails, it will take you.

Without an expensive suspension and wilder frames, hybrids are also less of a target for theft. Good mountain bikes can easily be over $5,000, while hybrids are generally much, much less expensive.

A hybrid bicycle is at home as a workhorse—your reliable steel steed to take you to work in the morning, to the grocery store on a rainy evening, or just along your friendly local seawall or forest path. Sporting wet-weather tires, a hybrid is much easier than a road bike to ride when it’s wet. The more expansive, textured tires provide a better grip. It also offers a friendlier seating position.

Road bike fans can easily argue that road bikes make better commuters on sunny days, and I would tend to agree. However, for 99 per cent of riders, the choice would be obvious on any rainy day.

Anyone who has ridden a mountain bike will tell you they suck the pump! That is, the compression of the suspension will sap your energy, forcing you to put in much more effort to move than you will with the rigid, non-suspended hybrid.

A hybrid bicycle has nearly all the capabilities of a road bike with a little less speed and most of a mountain bike’s capacity, just without the ability to perform more extreme stunts.

Can a hybrid bicycle truly go off road?

Growing up in North Vancouver, a suburb of Vancouver that is backed up against a mountain range, I remember the early days of mountain biking on Mount Seymour, and watching people bomb down runs with absolutely no suspension.

The key to mountain biking on such low-tech equipment is standing on the pedals and using your arms and legs as the suspension.  You have to be active in directing how the bicycle responds to the trail. It takes a lot of skill and strength, much easier said than done.

A better-equipped mountain bike will take you down rough terrain in relative comfort compared to a hybrid bicycle. The hybrid bicycle frame design will generally have you sitting up higher than a comparable mountain bike. One solution to the inherent instability would be to remember to lower your bicycle seat when you transition from road riding onto a mountain bike trail.

When you have a hybrid bicycle on a mountain bike trail, don’t get too jealous of your mountain-bike equipped friends and try and follow them at top speed. Mountain bike tires are thicker and inflated less so they can handle impacts. A hybrid bicycle with its standard 700c tires will have a really hard time staying inflated if you hit any roots or obstacles at high speed. Stick to riding gravel and dirt when possible. Avoid the pumpkin-sized rocks your mountain bike friends can hit head-on.

If you’re still on the fence about what kind of bike you need, let’s give a quick rundown of some fundamental mountain bike obstacles and consider how a hybrid bike would perform in comparison with a road bike or a mountain bike.

Skinny: Any straight, curved, or combination of narrow planks creating a track to ride along. It can be as narrow as your bike tire with 10-foot drops below it on extreme trails.

Roll down: Any significantly steep formation that you can lean back and roll down. If the bottom of the roll down is sufficiently curved, you can roll down 90-degree drops safely with the right technique.

Drop: An outcropping of rock or ledge that has a sheer drop below it.

Jump: A ramp or feature allowing you to soar through the air.

Gravel and rocks: Thick patches of baseball-sized rocks and smaller.

Boulder field: Any terrain feature that requires bumpy navigation down what almost looks like a stairway made of rocks. It can be quite steep and intimidating.

Final thoughts on hybrid bicycles and their toughness

While road bikes have a higher top speed, get more looks parked outside your local coffee shop, and are generally more agile, they are fragile beauties that prefer sunny days and the open, smooth road—much to the contrast of the mountain bike.

Mountain bikes are frustrating for commuting and can feel like punishment to pedal. Depending on how loose your front fork is and how much travel it has before the bump stops, a mountain bike can also be a bit dangerous in sudden-stopping situations in urban traffic, with the front end compressing so fast and resulting in a rider sailing over the handlebars.

In summary, unless you are trying to be Lance Armstrong or intend to see jumps higher than one metre quite regularly, the hybrid bicycle will be a reliable workhorse no matter the conditions or terrain.

4 thoughts on “Can You Take a Hybrid Bike Off Road? (And Should You?)”