Shimano is a trusted and reliable name among bike enthusiasts. So you would expect their components to be high quality.

There is variation in Shimano’s groupset offerings. Different components are designed for different riders, and not all of them are created equal. When it comes to their entry-level road bike groupsets, Shimano Claris and Shimano Sora are the first two you will come across.

Bike bloggers can debate the differences and similarities until they run out of road. The two main things a new or casual rider needs to know are that Claris is eight speeds and is a little cheaper, while Sora is nine speeds and is usually about 10 per cent more expensive.

What Is a Groupset?

“Groupset” is shorthand for all the mechanical pieces on your bike. These parts work together to allow you to propel yourself forward and safely stop.

You can purchase these components as a complete set or source them individually. If you plan to mix and match components, make sure they’re compatible before you buy anything.

When you buy a brand new bike, you aren’t guaranteed a complete groupset. Bike brands will often swap cheaper parts on lower-end models to reduce the cost of the overall bike.

The components that make up a full groupset are:

These are all important pieces you want to keep in great working condition.

A Short History of Shimano Groupsets

Shimano, founded in 1921, is a Japanese-based manufacturing company that mainly focuses on cycling components. They specialize in hybrid, mountain, trekking, and road cycling parts.

Their first road bicycle groupset was introduced in 1973. Named “Dura-Ace,” it utilized a “crane rear derailleur,” earning its title from the dropped parallelogram. It featured a pair of links instead of a single pivot, providing more reach. Made from aluminum, it was lighter. Shimano continued to improve its product line throughout the decade.

Between 1980 and 1983, Shimano introduced three groupsets with what they called AX technology. Additions included aerodynamic styling, center-pull brakes, and brake levers with concealed cables. By 1985, their highest-quality groupset improved yet again, with innovations such as index shifting with integrated shifter/brake levers, making it simple to switch through the range of gears with the tap of your index finger. Other innovations included free hubs, dual-pivot brakes, and 8-9-10 speed drivetrains. By the end of the 1980s, Shimano earned the title of largest bicycle part manufacturer in the world.

At the time, these were game-changing improvements in cycling. Now, thanks to Shimano’s trickle-down ideology, features introduced for their high-end models are now standard throughout Shimano’s product lines and those of their competitors.

In 2012, Shimano switched it up. Sora 3500 was nine speeds and included Shimano Total Integration, which combined braking and gear-shifting controls in one component for the first time in their entry-level groupsets. Claris 2400 had only eight speeds in the 2013 release.

The fourth and most recent iterations are the ones I will be comparing in this post: Sora R3000 from 2016 and Claris R2000 from 2017. Both systems use internal cable routing. The gears switched back, with Sora boasting the original nine speeds and Claris having only eight.

Claris and Sora shifters are nearly identical. Both benefit from Shimano’s dual-control system combining the brakes and levers. These latest versions also have internal cable routing. This keeps the handlebars neat and ready for mounting bags onto. The small difference is that Claris comes with a non-stainless steel shift cable. But this is a small piece that is often replaced, so you can always switch to stainless steel when you wear down the first cable.

Here are examples of shifters from Claris (left) and Sora (right): 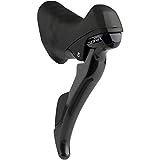 The front derailleur gets flagged as one of the only flaws of the Claris groupset. Shimano has spoiled its customers into expecting seamless shifting. But there is some slight resistance when moving up to a larger chain ring. Claris’ mainly steel front derailleur is heavier than Sora’s. The updated “long arm” has improved both Sora and Claris from earlier models.

You’ll be hard-pressed to spot a difference between Sora and Claris’ rear derailleurs. Both use plastic A-knuckles and are made from mostly steel. The one exception is the outer link on the Sora, which is aluminum, making it slightly lighter.

Here are examples of rear derailleurs from Claris (left) and Sora (right): 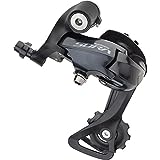 Claris’ rear cassette is eight-speed—plenty to get around with. However, some complain that there is a noticeable jump between each cog, leaving them wishing there was a smaller gap between chainrings. This is where the Sora nine-speed cassette proves its superiority.

If your bike is equipped with either a double chainring or triple chainring, both Sora and Claris are compatible with additional rings. You’ll notice less of a difference.

The cranksets are where you will start to see a difference in value. Claris has a 50/39/30 chainring range. Chainrings are steel except for the 50t, which is steel and plastic. Sora’s crankset has the same specs but is made from aluminum and plastic. In total, that’s 1080 grams for Claris. You can shave off 100 grams with Sora.

Both are similar and weigh around 180 grams. Some argue that Claris’ rim brakes are more efficient and easier to adjust. But you won’t notice much of a difference when both groupsets get paired with disc brakes.

The chain is another area where you can save yourself a bit of weight. Claris has an eight-speed HG71 chain, weighing 324 grams. Not a huge difference, but Sora’s nine-speed HG53 chain is 299 grams.

Sora Is the Better Long-Term Investment

Still wondering which is the better choice? Truth be told, as a beginner cyclist, you won’t notice much of a difference between the Sora R3000 and the Claris R2000. Both are fantastic systems. And thanks to Shimano’s reintegration of technological improvements, they are leaps and bounds ahead of previous generations of road biking groupsets.

When I shop around for a new bike, I take into account the type of riding I want to be doing. As a long-term investment, I want to keep my bike in great working condition for 10-20 years. Therefore, finding the best components available to me in the model I like is a deciding factor for me.

Shimano will continue to produce innovative technology. It is difficult to resist the urge to go for the latest and greatest. But it comes down to your cycling requirements, style, how often you ride, and your finances.

If you’re a budget-focused rider, go with Claris and you won’t be disappointed. If you’re thinking about your bike as a long-term investment, or if it is your main mode of transportation, I’d bite the bullet on a higher price range and go for Sora. You want something durable that will last you a long time, after all. It’s worth shelling out a little more up front for higher-quality parts that you won’t have to replace as often.

Morgan is a seasoned cyclist, but prefers the summer. Ever in search of the latest gear to help ride with ease and in style. Morgan enjoys the DIY approach to bike maintenance and is keen to share helpful finds with readers.